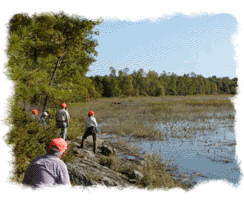 Merrymeeting Bay is the 9000-acre confluence of six rivers, two of which, the Androscoggin and the Kennebec, are two of Maine’s largest. Four smaller rivers flow from the towns surrounding the Bay: the Eastern from Dresden and Pittston; the Abagadasset from Bowdoinham and Richmond; the Cathance from Bowdoinham and Bowdoin; and the Muddy River from Topsham. Merrymeeting Bay is a unique ecosystem; technically, it is an inland delta, not an estuary, as it is cut off from direct access to the ocean; at low tide the waters of the Bay flow out through The Chops, a narrow gap, into the lower Kennebec. Though the Bay is affected by tides, there is very little salt in its waters. Large areas of the Bay consist of fresh water mud flats and sand bars upon which wild rice and pickerel weed flourish, plants that provide food and cover for waterfowl.

Merrymeeting Bay is home to several endangered and protected species of wildlife; it has long been recognized as a habitat of special significance for both wildlife and rare plants. Bald eagles nest in several locations around the bay and the bay supports numerous eagles during the winter. Over 50 species of freshwater fish use thebay as well as ten species of anadromous fish, including the rare Atlantic salmon, shortnosed sturgeon, Atlantic sturgeon, shad, smelt, river herring and striped bass. The Bay and its tributaries are favored breeding grounds for Canada geese, herons, and other wading birds, and for many species of ducks. Merrymeeting Bay’s freshwater tidal marshes support some of the best habitat for certain rare plant species anywhere in the northeast

The multiple fields allow for all levels of NAVHDA training. Adjacent to the fields, there is small pond that’s perfect for puppy and Natural Ability training. In addition to this small pond, Merrymeeting Bay is only a short walk from the fields, and provides exceptional Natural Ability and Utility level water. Please be sure to check the tide links to ensure adequate water levels.

The Yankee Chapter conducts a fall training clinic and a fall test at this site. The site is state owned and is therefore open to the public for training.

At our events the gate is open and public is allowed vehicle access to the site. There is shade, but it is limited, so it’s also recommended that you bring along some form of sun shade/shelter. We also recommend you bring plenty of water for both you and your dog. 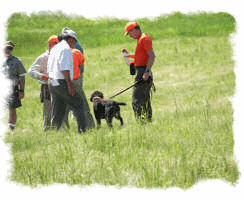 At other times, the gate is locked and it is about a 15 minute walk to the fields and bay from the small parking area so be sure to bring everything needed for you and your dog. ATV’s are allowed if they are to haul equipment for training.

No motor vehicles are allowed in the fields without written permission from the State of Maine.